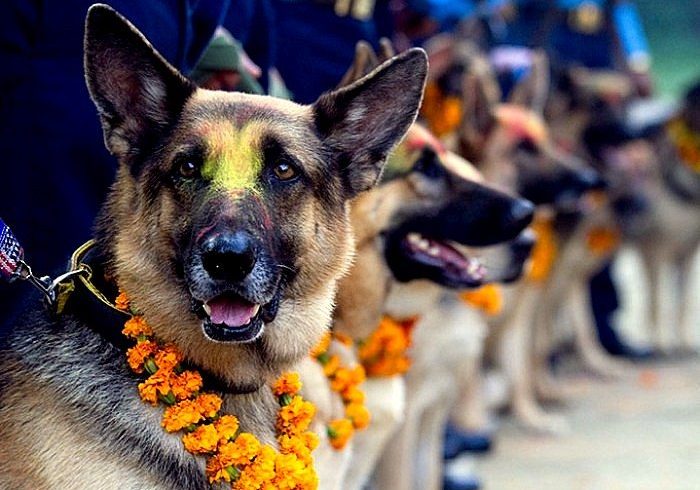 In Hindu religion, “Diwali” or “Lights Festival” is an autumn festival celebrating the human relationship with all things. Every day focuses on something special, and particular observances vary according to one Hindu religion to another. In Nepal, the Diwali festival is called “Tihar” and on Tihar’s second day, “Kukur Tihar,” dogs are celebrated for their special relationships with the Nepalese people.

Special to Nepal, there is a day devoted to all the Dogs, called Kukur Tihar, during this festival, primarily to thank our four-legged pets for always being our best friends.

In this particular day, Nepalese dogs are honoured and praised for their love and devotion, both those with homes and those without. Garlands and tasty food are given to reflect the close bond between humans and dogs. They’re often identified as a symbol of sacredness by a tika, a red mark added to the forehead. The tika serves as a blessing to those who come across the dog during Kukur Tihar.

Tihar is a five-day Hindu festival but our faithful companions are allocated the second day.

People give dogs garlands, tika (a symbol worn on their foreheads), and delicious food and remember the precious friendship between humans and dogs.

But only Nepali and Indian people celebrated their canine companions during The Dogs Day. By paying tribute to their furry friends and sharing cute images on social media, people around the world agreed to take part.

Are you a dog fan? If so, you’ll have to visit us to see and experience this unique and special Nepal tradition celebrating all things “doggie” for yourself!

In red powder, the dogs are labelled as a symbol of sacredness on their foreheads.