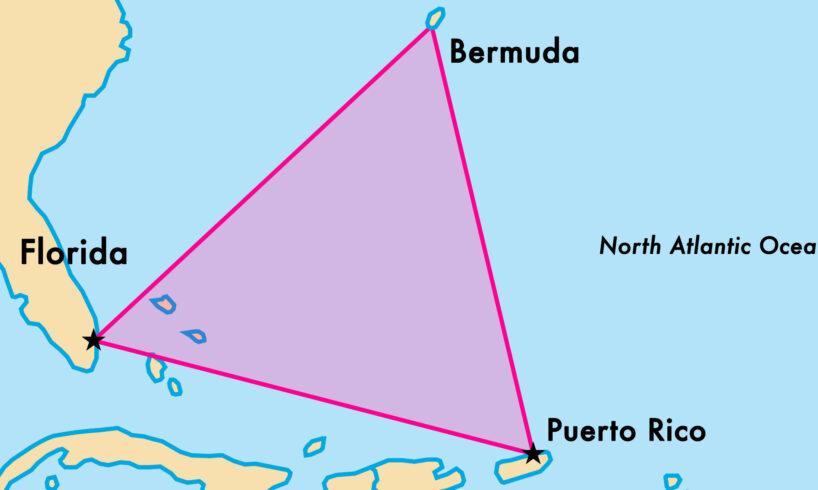 This is a North Atlantic Ocean triangular shaped field between USA and Puerto Rico. Within this triangle, hundreds of people and various vessels, ships and planes have gone missing.

It’s not a little Bermuda Triangle. Actually it is very wide, covering an area of 440,000 miles of sea.

Certainly, the Bermuda triangle is not set and its influence can be felt outside the triangle too.

Whenever any plane or ship disappears in the Triangle, the debris can not be identified. The explanation behind this is that Gulf Stream runs near to the triangle, which gets rid of the debris easily.

In the Bermuda triangle, people have encountered electronic fog and can also be a Time Travel Tunnel.

Pilot Bruce Gernon says that after passing into a time-warping cloud pipe, he lost 28 minutes. The plane missed radars, only to re-emerge at Miami Beach.

Christopher Columbus was the first person to write about a Bermuda Triangle. Within his notes, he wrote that the compass of the ship stopped working within the triangle, and he also saw a fireball in the sky.

Bermuda Triangle is one of the few locations on earth where the compass is not pointed in the direction of Magnetic North.

Then it points to the true north, causing uncertainty and that’s why so many ships and planes have lost their course in the triangle.

Some More Facts To Know About The Bermuda Triangle

The Bermuda Triangle lies in the Atlantic Ocean, between Puerto Rico and Florida.

The Bermuda Triangle has long been suspected to be the location where there have been a number of suspicious accidents involving planes and warships.

Although connecting the Bermuda Triangle to paranormal activity has become a part of popular culture, most investigations suggest bad weather and the more likely culprits are human error.

Research has shown that many initial reports of strange events were exaggerated in the Bermuda Triangle and that the real number of incidents in the region is close to those of other areas of the world.

While its notoriety may scare some people, the Bermuda Triangle is in reality part of a regularly sailed shipping lane with cruise ships and other boats often sailing through the area.

Stories of mysterious disappearances in the Bermuda Triangle started to enter public consciousness around 1950, and have since been recorded regularly.

Unverified supernatural theories for events in the Bermuda Triangle included references to UFOs, and even the legendary lost continent of Atlantis.

The USS Cyclops and their 309 crew who were missing after they left Barbados in 1918.

The TBM Avenger bombers that missed during a training flight over the Atlantic in 1945.

No trace of the aircraft has ever been identified on a Douglas DC-3 aircraft containing 32 people missing in 1958.

In 1955, a yacht was discovered that had survived three hurricanes but all of its crew was missing.