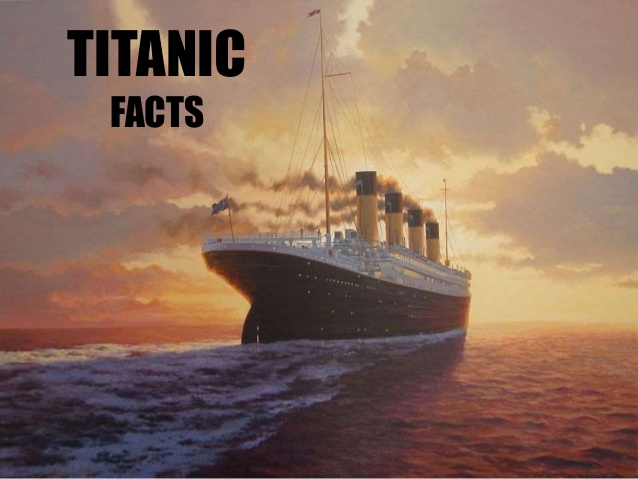 Facts About The Titanic That You Should Know

The same day the Titanic struck the iceberg, a lifeboat exercise was expected to take place on board the ship but the captain cancelled it.

Remember the scene in the movie where the musicians kept playing as the ship sinked. This was real, they only kept playing for hours. Sadly, none of them survived.

Milton Hershey of Hershey’s chocolate had reservations on the Titanic but his reservation was cancelled.

A Japanese survivor was regarded as a coward as he returned to Japan for not dying like the rest of the passengers.

For their original article of April 16, 1912 the British newspaper London Daily Mail announced ‘Titanic Sunk, No Lives Lost.’ The same appeared in other newspapers.

The New York Times spent the first week after the tragedy devoting 75 pages to coverage of the Titanic.

When the Titanic sent out distress signals a ship called Californian was close by, but the ship’s wireless operator had already gone to bed.

The Titanic’s chief baker survived the freezing temperatures of cold water, as he drank so much alcohol it kept his organs protected for 2 hours before he was rescued.

Most lifeboats on the ship were not loaded up to capacity. If they had been filled properly, there were enough lifeboats for all to live.

If they had gotten word about the iceberg 30 seconds before the captain did, the Titanic crash might have been avoided.

The iceberg which sunk the Titanic has begun its journey somewhere around 1000 BC.

Just two bathtubs were available for more than 700 passengers of the third class.

Here Are Some More Facts About The Titanic

The Titanic Was Enormous

The Titanic was designed to a colossal scale and was meant to be an unsinkable boat. It was 882.5 feet long in all, 92.5 feet wide, and 175 feet high. It would displace 66,000 tons of water and was the largest ship to date constructed.

The cruise ship Queen Mary was launched in 1934, overtaking the length of the Titanic by 136 feet, making it 1,019 feet long. In addition, a luxury liner designed in 2010 The Oasis of the Seas has a total length of 1.187 metres. That is almost a longer football field than the Titanic.

First-class passenger luxuries included a swimming pool, a Turkish bath, a squash court and a dog kennel. The onboard Ritz Restaurant was inspired by the famous Ritz in Picadilly Circus in London. Several staircases descended from seven of the ten decks of the ship and featured oak panelling and bronze cherubs on the grand escalator. The Titanic Museum in Branson, Missouri, includes a replica of the staircase.

To keep it going, the Titanic burned about 600 tons of coal every day. A team of 176 people kept the fires going, and it is estimated that every day the Titanic worked over 100 tons of ash were poured into the Ocean.

A lifeboat exercise was initially expected to take place onboard the Titanic the same day the vessel struck the iceberg. Captain Smith, however, cancelled the drill, for an unknown reason. Many people believe more lives could have been saved had the drill taken place.

Only Seconds to Respond

The officers on the bridge had just 37 seconds to respond from the time the lookouts heard the alarm before the Titanic struck the iceberg. First Officer Murdoch ordered, at that time, “fast a-starboard” (which turned the ship left to port). He also instructed the engine-room to restart the engines. The Titanic had left bank, but that wasn’t fast enough or far enough.

Lifeboats Were Not Completed

Not only were not enough lifeboats on board to save all 2,200 people, most of the lifeboats launched were not filled up to capacity. If they had been, there would have been 1,178 people saved, many more than the remaining 705.

For example, the first Lifeboat 7 from the starboard side only carried 24 passengers, despite having a capacity of 65 (two additional people later moved from Lifeboat 5 onto it). Lifeboat 1 was the one that carried the fewest people, however. While it had room for 40, it had only seven crew and five passengers (a total of 12 people).

Another Boat Was Faster for Rescue

The Californian, rather than the Carpathian, was the nearest ship when the Titanic started sending out distress signals. The Californian didn’t respond, however, until it was much too late for help.

Around 12:45 a.m. On April 15, 1912, California crew members saw unexplained skylights. These were the distress flares sent out from the Titanic and they woken up their captain to tell him immediately. Unfortunately no orders were given by the commander.

Since the ship’s wireless operator had already gone to bed as well, the Californian was unaware until morning of any distress signals from the Titanic. By then, all the survivors had already been seized by the Carpathia. Many people claim this might have saved far more lives if the Californian had responded to the Titanic’s cries for help.

These are interesting Facts About The Titanic