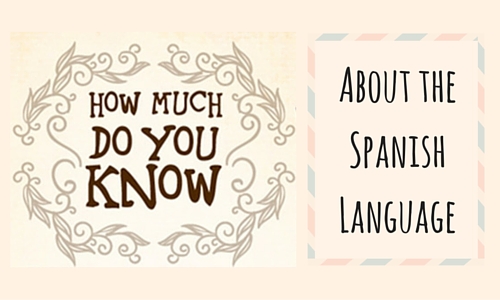 Spanish is the second language in the world that is spoken by the most.

The country with the largest Spanish speaking population is Mexico with 114 million speakers.

The country with the second highest population is 50 million (more than spain) in united states.

Spanish is the U.N’s official language. The European Union, the organization of world trade and other international organization.

Spanish is one of the most phonetic languages in the world. When you know how to pronounce the word, you know almost always how it is written.

The use of inverted question marks and exclamation points in Spanish is peculiar among the major languages.

The language that has influenced Spanish the most is Arabic, following Latin.

The research found that students with 2 years of learning Spanish or another foreign language score better on the ACT / SAT in their verbal grades.

The worldwide demand for Spanish language courses has nearly doubled in the last 10 years.

The mean number of words used by native Spanish speakers is 7,000 characters.

In the United States, Europe and Canada, Spanish is the most common foreign language to learn.

These are Some Amazing Fun Facts about Spanish Language