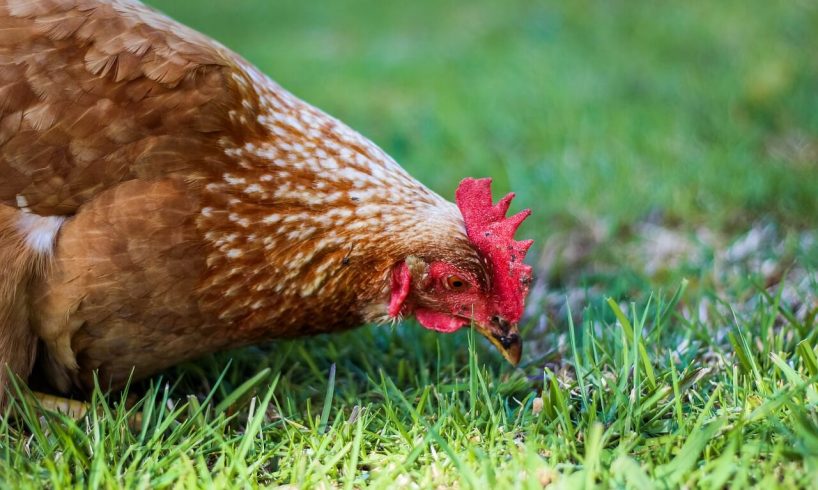 Chickens long ago were seen as exotic, fascinating birds. These descendants of exotic Asian jungle fowl were once revered due to their ferocity and intelligence. But then, we humans started eating them in ever-larger qualities until we reached the point where we are now, with 23.7 billion chickens living primarily on commercial egg and poultry farms. Here are some Interesting Facts About Chickens.

For millennia, chickens have been part of human lives, and yet they are one of the most misunderstood, if not ignored, species on Earth. From stellar math skills to ears that tell the color of their eggs, take a look at these facts about crow-worthy chicken.

Chickens are a subspecies of the Red Jungle Fowl that hails from Southeast Asia.

The red jungle fowl inhabits the edges of fields, scrubland, and groves of southern Asia and India.  They also have truly wild populations in Kauai and feral populations elsewhere in the United States.  The red jungle fowl domestication was well established over 4,000 years. They look very similar, though thinner, to common domestic chickens, but have white patches on the side of their head and grey legs.

Domestic chickens are Similar to their wild counterparts

Cognitive changes in chickens have not been caused by intensive selective breeding. In contrast, dogs and wolves have diverged significantly due to domestication. Lower violence toward predators occurred in many species as they were domesticated, although not chickens. Some chickens are more combative even than red jungle fowl. Red jungle fowl and chickens also react to the scent of predators, although most birds do not.

With numerous nerve endings, the beak is used to explore, detect, drink, preen, and defend. Scientists believe that the beak nerve structures have a sensitivity similar to that of a human hand.  These nerve endings mean that when a bird is de-beaked, as often happens in industrial farming, it experiences great pain, sometimes for months, which changes its behavior. The chickens eat less, have poorer feather condition from not preening, and spend less time pecking.

Chicken Combs are bright beacons of health and fertility

Combs, the red fleshy appendage on the top of a chicken’s head, tells you a lot about the fertility of a chicken. In hens, the larger the comb, the more eggs she lays. In males, the deeper the red of the comb, the more fertile he is. Scientists believe that there is a relationship between comb size and fertility, but the research is mixed. Hens choose roosters with larger, redder combs.

Chickens can see long distances and close-ups at the same time in different parts of their vision.  They can see a broader range of colors than humans.   They can hear at a wide range of frequencies. They have well-developed senses of smell and taste. Chickens bred for egg-laying can even orient to magnetic fields.  They do have magnetoreceptors in their beaks, similar to a compass. This helps chickens navigate back to food sources from their roosting areas. Chickens that undergo beak trimming must remain closer to their food sources to avoid losing their way back.

Hens Talk to Their Eggs

The chicks inside the eggs peep back as they near hatching.  The chicks hear sounds after the 12th to 14th day of incubation.  When talking to the eggs, the hens use a combination of humming and clucks, which helps speed the chick’s prenatal brain growth. Researchers have discovered that the hen’s small talk also helps the chick imprint on the correct hen.

These were some of the Interesting Facts About Chickens.