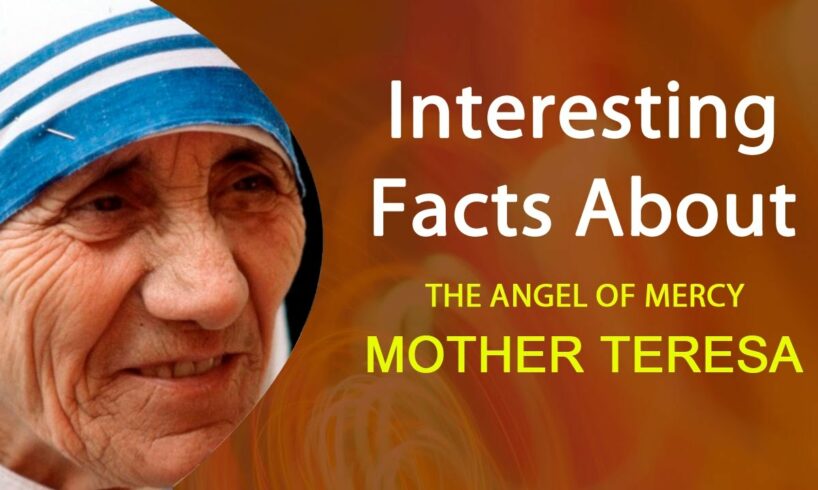 Mother Teresa is known for her charitable deeds, but even people who supported the poor know nothing about her beyond nun.

These are some more important facts about Mother Teresa.

1. On 26 August 1910, Agnes Gonxha Bojaxhiu was born in Macedonia to a financially stable Albanian family (they owned two homes in which they lived). Her father died when she was eight and ended her family’s financial security.

2. From an early age, Agnes was intrigued by missionaries and by 12, she realized she was going to devote herself to a religious vocation.

3. Agnes left home when she was 18, and joined the Loreto Sisters in Rathfarnham, Ireland.

4. After the day she left for Ireland she never saw her mother or sister again.

5. Following a year of English schooling in Ireland, Agnes was moved to the Loreto Sisters Convent in Darjeeling, India.

6. In 1931, she made her vows as a nun, choosing the name Teresa in memory of Saints Therese of Lisieux and Teresa of Avila.

8. Sister Teresa began teaching history and geography at St. Mary’s in Calcutta, a high school for the affluent daughters. She lived there for fifteen years, loving the job but was saddened by the suffering she saw all around her.

9. In 1946 Teresa travelled for a retreat to Darjeeling. She realized on that journey what her true call was:’ I heard the call to give up everything and obey Christ into the slums to serve him among the poorest of the poor.’

10. It took two years of planning before she could start doing the research that she felt driven to do. She required permission from the Loreto Sisters to leave the order while keeping her vows, and permission from the Calcutta Archbishop to live and work among the needy. She prepared to take a nursing course, too.

11. Sister Teresa set aside the habit of her convent in 1948, instead of embracing the plain sari and sandals worn by the women she would live with, moving to a small rented hovel in the slums to continue her work.

12. Teresa’s first year in the slums has been particularly challenging. She was used to a life of comparative luxury and now she had no money and no other way to get food and supplies but to beg. She was always tempted to go back to life in the convent and had to rely on her resolve and faith to get through it.

13. One of her first initiatives was to educate the poor children, building on her knowledge of educating the poor ones. This time she had no tools or materials but taught them to read and write with sticks in the dirt.

14. Teresa taught the children basic hygiene, in addition to encouraging literacy. She visited their families, inquiring about their needs and helping to support where she was able to.

15. Word began circulating about the good works of Mother Teresa and she soon had other volunteers who wanted to help. By 1950 she was able to launch the Mission of Charity, a community devoted to caring for the starving, the poor, the disabled, the crippled, the blind, the lepers, all those people who feel unwanted, unloved, uncared for in society, people who have become a burden on society and are shunned by all.

16. She went on to open a hospice for the sick, a shelter for leprosy sufferers, and a shelter for orphans and disadvantaged young people.

17. Mother Teresa received numerous awards during her career, from the 1962 Indian Padma Shri to the 1971 inaugural Pope John XXIII Peace Prize to Albania’s 1994 Golden Honour of the Country and, most notably, the 1979 Nobel Peace Prize.

18. Rather of calling for the $192,000 fund to be allocated to support India’s needy, she declined the usual Nobel award banquet.

19. Throughout the rest of her life, she continued her work for the needy, heading the Missionaries of Charity until just months before her death on Sept. 5, 1997.

20. Mother Teresa was canonized on Sep. 4, 2016, after she was beatified in 2003. Pope Francis proclaimed her a saint at a ceremony on St. Peter’s Square, but added, “With great spontaneity, I think we will continue to name her Mother Teresa.”

These were some interesting facts about mother Teresa