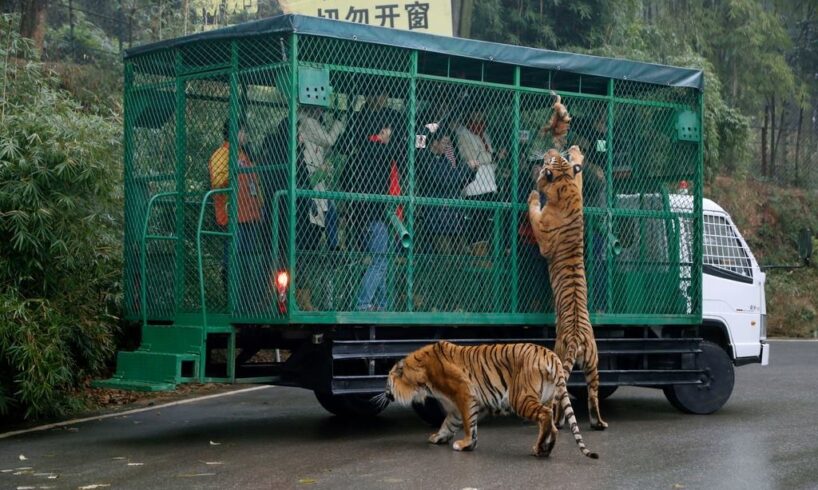 There’s a Lehe Ledu Wildlife Zoo in china in reverse, where people are locked up in cages. The lehe led wildlife zoo in Chongqing carries tourists in caged buses while the animals play freely in an attempt to keep them happy and less depressed with longer lifespans.

The zoo was opened in 2015 and not only the locals but also visitors flocking the country from outside take pleasure in it. The initial opening was so great that it was sold out straight for three months!

At Chongqing, China’s Lehe Ledu Wildlife Zoo, it’s the people that are trapped behind cage while the animals roam free. Visitors can book a tour where they will be enclosed in the back of a truck in a cage and pass through enclosures for predators. Raw meat is hanged on the cage’s edges, to allow the animals to get closer.

We decided to offer the thrill of being stalked and targeted by the big cats to our guests but with, of course, no risks. Guests are warned to keep their fingers and hands inside the cage at all times because the difference between them and breakfast will not be known to a hungry tiger.

While this isn’t everyone’s cup of tea, so far the tours have been booked three months in advance already.

The Lehe Ledu Zoo is a fresh take on traditional zoos where people enter a cage very happily for a stipulated period to respect the wild beasts limitless independence. It’s about getting the man tamed for a change! Travellers have to have this destination on their bucket list in order to witness the novelty and animal friendly atmosphere.