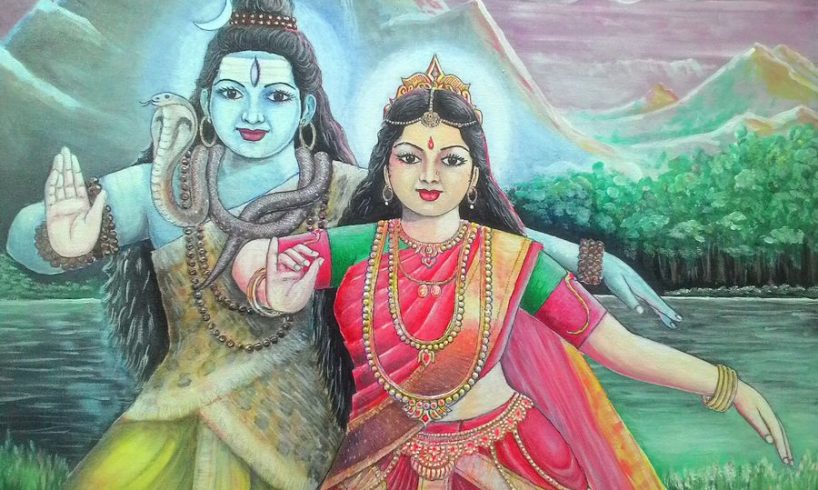 Shiva is the god of yogis, self-controlled and celibate, though at the same time remarkable lover of his wife. He is the destroyer, following Brahma the creator and Vishnu the preserver, after which Brahma again creates the world and so on. Shiva is responsible for the change, both in the form of death and destruction and in the positive sense of killing the ego, the false identification. Let’s talk about the Marriage of Lord Shiva and Parvati.

The first wife of Shiva was the goddess Sati. Shiva lost all interest in the world after the death of Sati. He withdrew to the top of his mountain, Mount Kailash, and residence in a cave, where he was engaged in deep meditation.

Before the death of his beloved Sati, Shiva had given the boon of invulnerability to a demon called Taraka. When shiva gave up the world and the heavens, Taraka realized that this was the right time to attack. The devil had soon taken control of both heaven and earth, and chaos reigned supreme all over. The Gods tried to do everything in their power but in vain, they finally turned to Shiva at this dire hour. But Shiva was uninterested. According to one legend, even if Shiva wanted to do something, he would not have been able to do it. Shiva also lost all of his powers when Sati died.

In one of the stories of the sacred Hindu texts, the explanation given for this is that Sati is a reincarnation of Shakti and Shakti means power. So, Shiva lost his Shakti when Sati died. He was powerless. Shakti represents the Energy, the force without which Shiva is incomplete.

It is said that once back at Mount Kailash, Shiva and Parvati proceeded to have such passionate lovemaking that the Gods feared for the world’s future and were forced to go to Nandi and ask him to intervene! From this union, Lord Kama was reborn just as Parvati had foretold.
Parvati and Shiva have lived together ever since, in conjugal harmony, known to all as the perfect couple.

Therefore, many know that Shiva and Parvati have the perfect marriage. The relationship between Shiva and Parvati has been depicted in many forms. Parvati is said to be the balancing factor in Shiva’s life only second to the intense meditation that he practices.

When Shiva is angered and takes the form of Natraja, all the Gods worry that Shiva will destroy the entire cosmos, but it is Parvati who calms down the angry Lord by matching his fierce and destructive Tandava dance with her own slow, graceful steps thus complimenting him at his best and at his worst. Shiva’s personality is replete with dichotomies. On the one hand, Shiva is an ascetic who disappears from the mortal world, into Mount Kailash and meditates there.

On the other hand, he is a fierce and angry God whose temper knows no bounds. He will destroy everything in his path. Through all this, Parvati brings him back to balance by pulling him towards the role of a householder.

This is all about Marriage of Lord Shiva and Parvati.