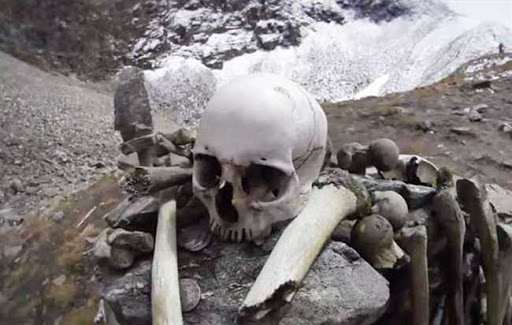 Scientists have discovered that the skeletons found in the vicinity of the frozen lake by around 200 people belonged to Indian tribesmen from the 9th century who died from the hail storm. Here is Roopkund Lake Mystery.

The mystery of Uttarakhand’s Roopkund behind the skeleton lake was finally resolved.

Scientists believe that approximately 200 discovered skeletons near the frozen lake are from the survivors of an Indian tribal dying from the hailstorm of the ninth century.

In 1942, a British forest guard first observed the skeletons. The skeletons were originally thought to be those of Japanese soldiers who died during the Second World War while crossing this route.

However, scientists now discovered that tourists and locals have found skeletons, as the bodies dated around 850 AD. Research has shown that two main groups were skeletons – one a family group and the other relatively small.

The researchers concluded that death was caused by a fatal blow on their heads and by no weapon, avalanche or landslide damage. The marks on the skulls and the shoulders look like a cricket ball struck by something big. The absence of damage to other parts of the body showed the hard circular objects, probably grinding balls or ice balls, fell from above.

At 5,029 m above sea level in the Himalayas, the lake, known as ‘Skeleton Lake’ is located.

Hundreds of scattered skulls can be seen every year as the snow melts.

Earlier it was claimed that General Zorawar Singh of Cashmere’s skulls and his men were lost and died in the Himalayan region after being caught in bad weather on their way back from the battle of Tibet in 1841. Or it might have been a lake-side epidemic or suicide ritual.

Roopkund is regarded as a mystical lake and is surrounded by glaciers and mountains covered with snow. The lake is roughly two meters deep and every year attracts hundreds of walkers and pilgrims.

In the Roopkund, once every twelve years, pilgrims are present at the Nanda Devi Raj Jat, in which the deity Nanda is worshipped.