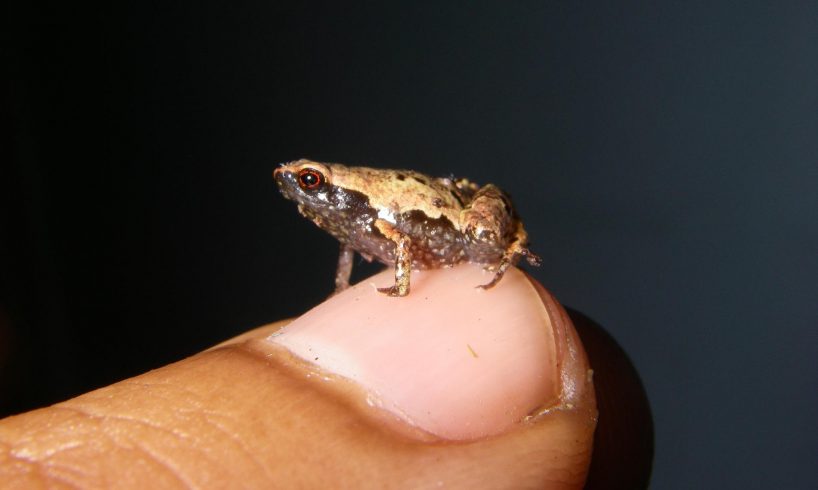 On Earth, there are some 8.7 million known species. But it is always exciting to know when scientists find some mysterious creatures they didn’t know existed or rediscover one not seen in ages. When it comes to biodiversity, more is a good thing. And I know that’s stupid, but seriously, bonus points if they’re cute, right? Here are Some New Animals Just Dropped By Scientists.

Well here’s a treat: On a trip up to the Zongo Valley region of the Andes, a team of researchers led by biologist Trond Larsen, who works with the environmental protection advocacy group Conservation International, recently cataloged not one, not two, but 20 species that scientists did not realize were out there. They came across some super-rare species, which were not completely unknown to the research community, but had not been seen in a long time, as well as some more commonly seen, which are just fantastic.

Larsen said in an emailed statement, “These discoveries are the result of 14 days of intense fieldwork spread across the rugged terrain, misty cloud forests, and cascading waterfalls of the Zongo, a truly beautiful and diverse landscape.”  The remarkable rediscovery of species once thought to be extinct, especially so close to the city of La Paz, illustrates how sustainable development that embraces the conservation of nature can ensure long-term protection of biodiversity and the benefits that ecosystems provide to people. This area has become a safe haven for amphibians, reptiles, butterflies, and plants that have not been found anywhere on Earth. Let’s take a look at Some New Animals Just Dropped By Scientists.

The Lilliputian frog, known as Noblella by a biologist, got its name for being super teeny tiny. This guy is just 1 centimeter long (0.4 inches), which is half the width of a penny. In the Andes, they may be the smallest amphibians, and among the smallest in the world. No wonder they were never seen before by scientists! In fact , Trond’s team almost missed them.

“We heard many of them calling in the forest, but they would stop calling as soon as we got close to them and would then be virtually impossible to find because of their tiny size and camouflage,” Trond said in an email.

Since these little guys tend to reside in tunnels underneath the thick layers of moss and the rich soil of Bolivia’s Zongo cloud forest, they weren’t even easy to find by tracking their chirpy calls.  Yet they’ve been found by scientists. And thank god, because just look at this frog.

The Bolivian flag snake, technically called the Eutrachelophis, had never been observed by researchers. The team found this one in the thick forest undergrowth that sits at the crest of the area explored by the researchers. The snake was slithering along the ground among some dense fern plants.

Similar to the Bolivian flag, this species gets its name from its red, yellow, and green colors. Very Patriotic. Salute the snake. Some new animals found by scientists.

This devil-eyed frog-  or Oreobates zongoensis for long – is known for its blood-red eyes. Someone has been getting a little stoned, I think.

This species had only previously been observed by one scientist, and that was more than two decades ago. Since then, researchers have searched the Andes far and wide for these frogs, but to no avail.

But on this trip, the researchers found a bunch of these frogs all over the Zongo Valley, which means that previous expeditions might have been searching in the wrong places. The frogs’ elusive nature may be partially due to their sneaky habits. Like the Lilliputian frog, the devil-eyed frog prefers to hide under moss and soil around bamboo roots.

All right, this one isn’t an uncommon species, but it has got a vibe. This is the caterpillar of a morpho butterfly, but I am beginning a petition to change its name to “Spencer’s Gift caterpillar” because of look at that neon green and those shocking pink hairs. It really looks like this guy has an embarrassing middle-school mohawk that he’s heading to the mall to show off.

They turn into bright blue butterflies as these guys grow up. Their color makes them frequently sought after by tourists and collectors who have spotted them. But the caterpillar had never been documented by scientists until now. They are one of Some New Animals.

This is a satyr butterfly (or if you feel fancy, Euptychoides fida), and scientists thought it was gone from the region.  This species hasn’t been seen in 98 years. this butterfly is only known to live in and around the Zongo Valley. Researchers used rotten fruit and dung (yum?) to capture a specimen in a cylindrical mesh trap.

This isn’t the most dazzling-looking of the creatures that the researchers found, but it’s still beautiful to me. The designs on its wings remind me of an antique piece of pottery or a wool shawl with embroidery. 10/10 Butterfly, hope to see you again, ideally in the wild.

These are Some New Animals Just Dropped By Scientists.