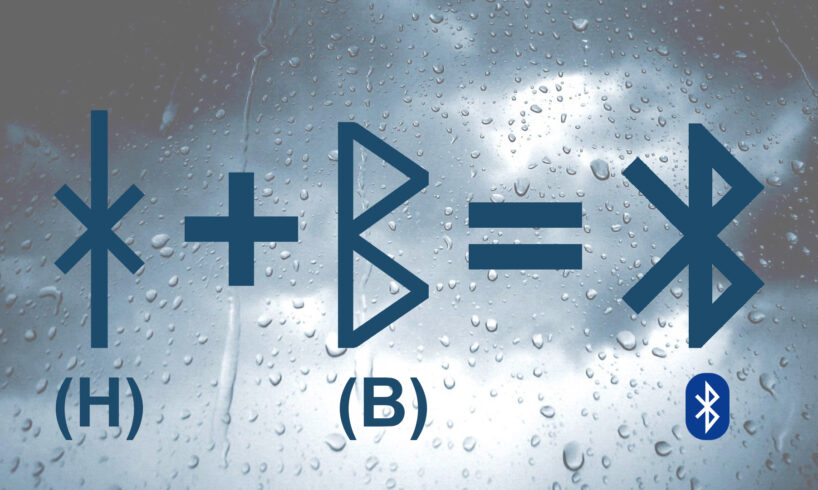 Here is the story of King Harald Bluetooth. Harald Bluetooth (c. 910–c. 987) Otherwise known as King Harald I of Denmark, was best known for three major achievements. First, he completed the task of unifying Denmark under one single ruler. Second, he conquered Norway — an event that had considerable historical consequences. Finally,  He converted the Danes and Norwegians in Christianity. The dynasty he founded went on to rule over an increasingly large kingdom which at its height included much of the British Isles and parts of Sweden.

King Harald Bluetooth, or Harold Bluetooth, was born around 910, son of the first king in a new line of Danish royalty, Gorm the Old. His mother was Thyra, whose father was nobleman of sunderjylland (schleswig). Gorm established his power base in Jelling, northern Jutland, and began unifying Denmark before his reign was over. Thyra was inclined toward Christianity, so it may be possible that young Harald had a favorable view for the new religion when he was a boy, even though his father was an enthusiastic follower of the Norse gods.

Indeed, Harald Bluetooth Gormsson (aka Harald Blåtand Gormsson) ruled in the mid- to late 900s as King of Denmark. Many credit him with bringing Christianity to what was once a pagan region as well as uniting different leaders in nonviolent negotiations.

The Bluetooth logo is a combination of the ‘H’ and ‘B’ initials written in scandinavian runes.

How long did Harald Bluetooth rule?

Harald Bluetooth ‘The King of Denmark’ Ruled From 958 until his death in 986.

Who was Harald’s wife?

He was married to Tove, who became Denmark’s first Queen.

Harald Bluetooth had two daughters, Thyra and Gunhild, and one son Hakon. There are reports he even had a son named Svend , with a woman named Aesa from fyn in Denmark. This is however not something that can be confirmed, and might just have been rumored.

Harald Bluetooth was a Christian

After seeing Monk Poppo, carrying a red-hot iron glove in his hands without getting burned, Harald converted into Christianity

The Danes were united into one Country

Harald Bluetooth was credited with the unification of the Danes into a single Kingdom called Denmark. Which can be read on the Jelling stone, that can be visited at the church in Jelling.

It was Harald who ordered Jelling stone to be erected in the city of Jelling. This runestone was a symbol of the unification of Denmark, and it was made so everyone, especially the Roman-German emperor, could see that the Danes were now Christians.

How did Harald Bluetooth die?

Sweyn Forkbeard, son of Harald Bluetooth, started a revolt that led to the death of his father in 986. According to the sagas, he died in Jormsborg which is located in the northern part of Poland.

This Was an Interesting Story Behind King Harald Bluetooth