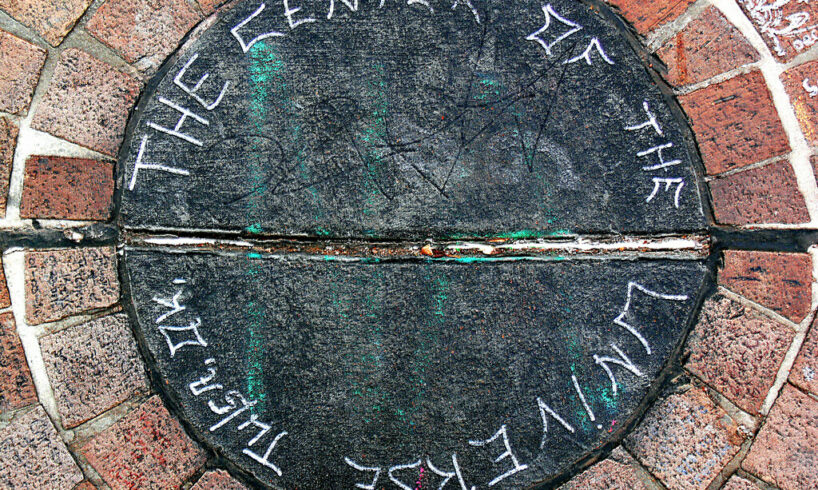 SO-CALLED ‘THE CENTER OF UNIVERSE’ is marked by a small concrete circle in the center of a larger circle of bricks. It’s not much to look at, but looking isn’t exactly the point.

The “Center of the universe” is a fascinating acoustic phenomenon. if you are standing in the middle of the circle and making a noise, the sound is echoed back many times louder than it was. This is your own private amplified echo chamber.

As the legend goes, there could be a foghorn going off in the middle of the circle, and those outside wouldn’t hear it. This may be an exaggeration but when heard from outside the circle, your voice sounds extremely distorted. It is an incredible effect

Like the Lake George Mystery Spot — another acoustic vortex that appears to defy the laws of physics — the effect is thought to be caused by the sound that reflects a circular wall, a nearby planter in this case. Still, the cause of the odd anomaly has been studied by many people and there is no clear consensus. Whatever the causes of this natural Sonic distortion may be, it is truly a wonderful place.

Architects and art curators have theorized that a hollow echo of sorts was accidently created by an expansion joint, or embedded steel angle, which separates the inner circle.  Some think that the occurrence is caused by the voice of the individual reverberating off the half-circular, raised planters that partly surround the circle.

Coupled with creative branding as the center of all that exists, the mystique draws constant visitors.

Some look at the destination while experiencing it for the first time.   Many others even chose the spot for proposals, pictures of engagements and marriages.