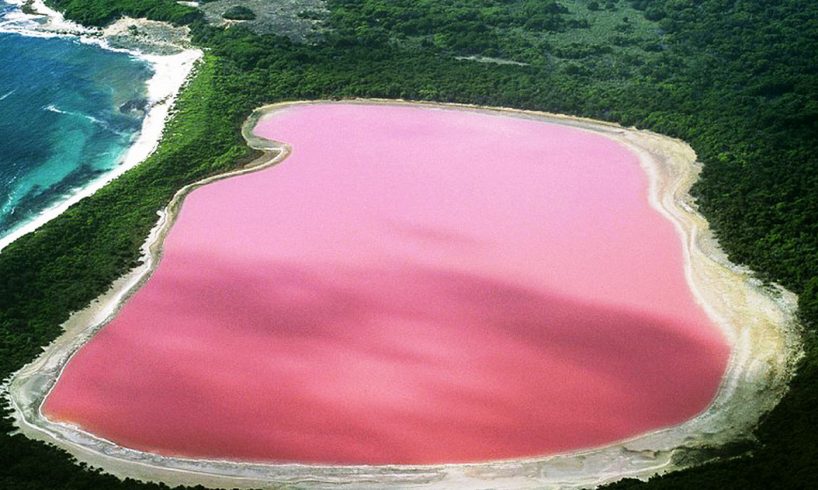 Imagine this with your eyes closed. You’re on a vacation. The sun is bright and the air is crisp. When you’re flying over a beautiful island off Australia’s western coast, you come across a lake that’s as blue as, no, wait, as pink as… the sky? Wait, something’s not quite right here. Now let’s talk about that Why is Australia’s Pink Lakes Pink.

But it’s true that Australia has some incredibly attractive lakes that look like something out of a cotton candy dreamworld. Lake Hillier, on Middle Island off the coast of Western Australia, is perhaps the most famous and Instagram-worthy. It makes for some pretty wild aerial views, especially when you contrast its pink hues with the turquoise bay just across from it.

So, why are these lakes pink anyway? It’s been a mystery for some years, but the puzzle has finally been cracked. Pink bodies of water, such as Lake Hillier contain both Halobacteria and Dunaliella salina (a type of algae) that thrives in salty environments like the pink lakes. These similar algae also flourish in the Dead Sea.

Further east, Murray-Sunset National Park in Victoria has some beautiful views of its own four pink lakes and offers camping options as well.

Bonus tip: If you’re going to the park, bring your own water because you can’t drink the water there due to the salt content in the lakes.

Unlike Lake Hillier, which is pink all year, the pink lakes in Murray-Sunset are best seen in the late summer when the water changes colors from deep pink to a pale salmon-like shade.

Air tours and boat cruises are the main ways to get to Lake Hillier, however, landing on Middle Island is not an option. Although swimming in a pink lake at Murray-Sunset National Park is technically possible, but it is not recommended due to the high salt content of the water. Furthermore, the park’s website requests that you leave the park in the same condition in which you found it, so it’s best to leave your swimming suit at home to protect these natural wonders for future generations.

From Lake Retba in Senegal to the Salinas de Torrevieja in Spain to Pekelmeer on the Caribbean island of Bonaire, identical bubble-gum-pink bodies of water may be found all over the world.  So, what are you waiting for?  But, make sure you plan your trip carefully and don’t be fooled by marketing schemes. The actual “Pink Lake” in the Western Australian town of Esperance hasn’t been pink in years, having lost all of its colors and taken on a milky white hue, leading locals to petition for the lake to be renamed “Spencer Lake” as it was originally called. This is the reason Why is Australia’s Pink Lakes Pink?

How many pink lakes are there?

There have been 29 pink lakes discovered so far around the world. From Lake Retba in Senegal to the Salinas de Torrevieja in Spain to Pekelmeer on the Caribbean island of Bonaire, there are many pink bodies of water around the world.

Is there anything living in Pink Lake?

The only living organisms in the Pink Lake are microorganisms such as Dunaliella salina, red algae that generate the salt content in the lake and create a red dye that gives the lake its color, and as well as red Halobacteria, which is found in the salt crusts.