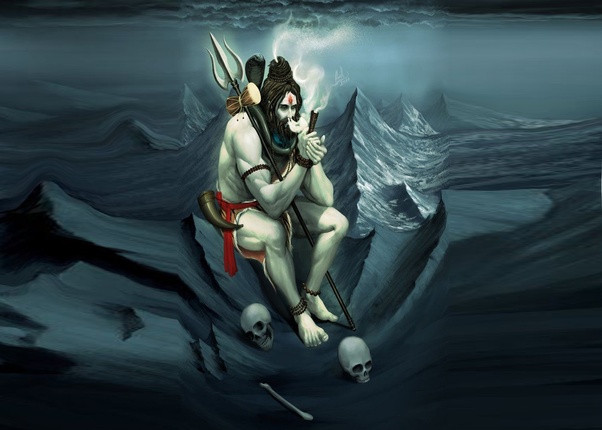 On the occasion of the Maha Shivratri, which marks the day Lord Shiva saved the world from darkness and married Goddess Parvati, Cannabis comes alive as devotees flock at Pashupati, one of the holiest Hindu temples in Nepal, in the capital city of Kathmandu. Let’s talk about ‘Why Did Lord Shiva Smoke Weed?’

Grabbing onto clay pipes or chillum and smoking cannabis, dreadlocked sadhus make way to station their belongings and share this ‘prasad’. Some call it a way of achieving euphoria, while others use it to stave off worldly desires.

However, its association with Mahadev is the most basic tale of literal medicinal use. According to Atharva Veda, Cannabis is one of the five most sacred plants.

It was during Samudra Manthan when Lord Shiva first discovered it.
Legend says that during the Samudra Manthan, devas (gods) and rakshasas (monsters) shook the ocean to receive Amrut (a drink to immortality). However, due to the continuous churning, Halahala, a lethal poison was released that threatened all creation.

To protect everyone, Lord Shiva drank this poison, which gave him the name of Neelkanth (blue throat). He was offered bhang to ease the pain (seeds and leaves of cannabis). Most of the medicinal lore around cannabis comes from such tales where Lord Shiva uses the plant to cure an ailment.

Traditionally, Bhang has been associated with the worship of Shiva, which is why he is often called the ‘Lord of Bhang’. However,  In Hindu mythology, Lord Shiva is first and foremost the God of all creation and destruction with a particular liking for all that is rejected – corpses, intoxicants, and the likes.

This preference for taking what is rejected by society extends to his love for cannabis. The destruction aspect of his personality also extends to the metaphysical world – he is the destroyer of ignorance and illusion, and this particular trait is enhanced by his use of cannabis.

Tn almost complete contrast to the use of the drug as escape, the Vedic texts tell of how Lord Shiva used it to turn inward and gain the ultimate mastery of his senses, but they also repeatedly warned that he is the only one capable of using it – so mere mortals should refrain from even attempting.

Devotees celebrate the festival each year on Maha Shivratri by eating bhang, smoking cannabis and chillums. Even though cannabis is not directly associated with Lord Shiva apart from its spiritual and medicinal value – people believe it brings them closer to Lord Shiva.
According to the legend of Samudra Manthan, some devas and rakshas shook the ocean in order to obtain Amrita.

Due to the churning, a lethal poison named Halahala was released which was so powerful that it could destroy all the creation.

Lord Shiva consumed the poison in order to protect the world. This situation gave him the title Neelkanth. Later, to cool down Lord Shiva, he was offered Bhang.

According to the sources, Once when Shiva was wandering in the field after a resentful debate with his family, he fell asleep under a leafy plant. Lord Shiva felt hungry after waking up and therefore consumed the leaves of the cannabis plant. After consuming it, he realized that it is a refreshment. Then he made it his favorite food and became the lord of Bhang. This is the reason Why Lord Shiva Smoke Weed?